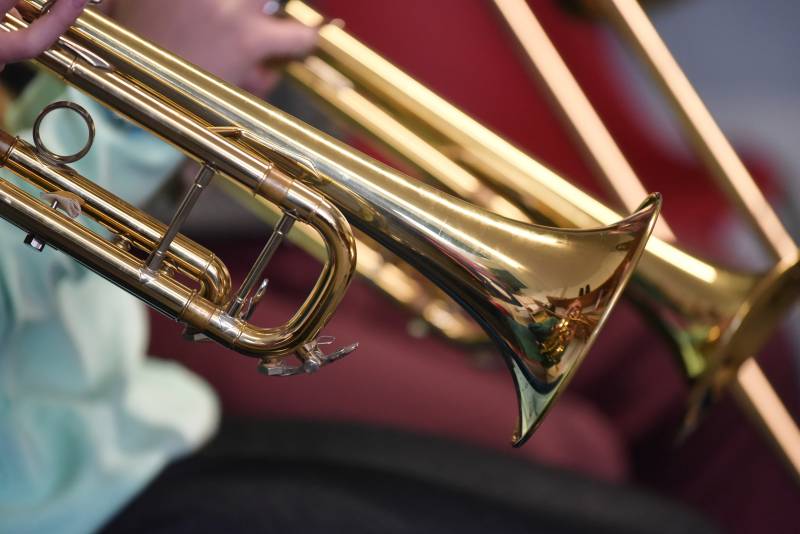 There are many times each week when the walls literally reverberate to the sound of music. Our specialist music teacher Ben Glasstone teaches music to every class in the school from Nursery through to Year 6. In Key stage 1, children get a music lesson every week for half a term at a time and in Key stage 2 that is extended to a 45 minute lesson every week throughout the term.  In addition, Ben leads a singing assembly for each Key Stage every week plus an extra half an hour of singing for Key Stage 1 and Early Years.

Ben’s music lessons are designed to build core skills in singing, musicianship, composing and listening skills, as well as introducing music notation as the children move into Key Stage 2.  In Year 3 children learn to read and play simple melodies on the glockenspiel.  Throughout Year 4 children learn to play the ukulele, focusing on chords and song accompaniment, with some also learning melodic playing.  As a focus for the children’s developing musicianship and creativity, Ben works with each class to develop a special performance inspired by their topic of the term, which is then featured at each class’s termly class assembly. Ben is an award-winning professional composer and songwriter and he uses these skills to create songs and compositions with the children, including the ever-popular “Yerbury Song.”

In addition to the children’s weekly music lessons, Ben runs an inclusive choir comprising a whole year group – Year 4 in the Autumn term, Year 6 in the Spring and Year 5 in the Summer (when the latter  choir gets the opportunity to perform at the Union Chapel as part of Pure Voices). These choirs often perform for the Senior Citizens lunch club round the corner at Whittington

Yerbury also has a strong tradition of brass teaching. Our brass teacher, Rachel Adams, teaches pupils from Year 3 onwards at Yerbury after school on two days of the week. The school continues to support the brass band, made up of Rachel’s pupils, which performs every term at a special school assembly.

Those children who may be learning an instrument outside of school are encouraged to bring it in to show their progress to their peers in a termly “Class Concert” from Year 3 onwards. When the children reach Years 5 and 6 they all have the opportunity to play in the school band, if they wish, for at least one term. This is a mixed band of about twenty players, comprising string and woodwind players as well as xylophones and percussion (and ukuleles!) – it is open to all and those who do not receive instrumental lessons outside school are well able to take part with the skills they have acquired over their time learning music at Yerbury.

We are working with the local Music Hub (Music Education Islington) to find opportunities for children who do not have the chance to learn an instrument outside school to do so, and have plans to restart  our after-school recorder club (which hasn’t been able to run during the pandemic) to help meet this need.  We are also working longer-term on developing more instrumental teaching opportunities in the school.

Children who have been learning an instrument for over a year are encouraged to take up the opportunity to take part in Music Education Islington’s Young Artists programme, run by the Guildhall, which takes place on Wednesdays after school at Highbury Grove school.

There is also a popular Yerbury Adult Community Choir, led by Tom Scratchly, which meets on Monday evenings, and a staff choir run by Ben which meets on Thursday afternoons. Both of these choirs sing for occasional school events and assemblies.